Feast of Our Lady of Mount Carmel 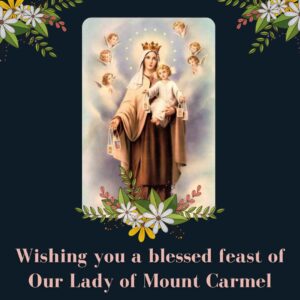 On 16th July, the Roman Catholic Church commemorates the feast of Our Lady of Mount Carmel. It is celebrated to solemnize the day Our Lady appeared to St. Simon Stock and presented him with the scapular.

To get a better understanding of what makes the feast of Our Lady of Mount Carmel significant, we need to go back to the Old Testament.

During the time of Elijah, Israel was hit by a terrible drought as the people had drifted away from God. It was here on Mount Carmel that Elijah fervently prayed to God for the salvation of Israel. After many days of penance and sacrifice, his prayers were answered in the form of a little cloud that arose from the sea, this was followed by a torrent of rain which revived the parched land. Thus, saving the people of Israel.

It is said that the cloud that appeared was a symbol of the Virgin as prophesied by Isaiah (Isaiah 7:14). Coincidentally, several hermits living on this mount witnessed this miracle and soon after became disciples of Elijah. They prayed for the advent of the much-awaited Virgin, who would become the mother of the Messiah. From here we see the origins of the Carmelite order begin to take roots.

Taking a leap into the 13th Century, during the crusades, a man named St. Simon Stock, joined a group of hermits on Mount Carmel during a pilgrimage to holy land. After living a hermetic life he entered the Carmelite order and in a few years became the 6th superior general of the Chapter in England. Unfortunately, the Carmelite order was facing a lot of persecution and oppression from other orders, this had greatly troubled Simon Stock; but he continued to pray and place his trust in the Lord.

On July 16th, 1251, as Simon Stock knelt in prayer, Our Lady appeared to him, holding the Child Jesus in one arm and the Brown Scapular in the other. She uttered the following words: “This shall be   the privilege for you and for all the Carmelites, that anyone dying in this habit shall not perish in eternal fire but be saved”. With this Our Lady presented St.Simon Stock with the scapular and told him to promote devotion to it, thus the scapular came to be. Subsequently, in 1252 the Carmelite order received a letter of protection from Pope Innocent IV, defending them from harassment.

Years later after the Carmelite order was established and began to spread across the world, Pope John XXII got a vision of the Blessed Virgin who gave him the message that those who wear the scapular faithfully and remain devoted to the blessed Virgin until death will be granted the grace of final perseverance and will be delivered from purgatory early.

Significance of the Brown Scapular

You might be wondering why much importance is placed on the scapular. The scapular of Our Lady of Mount Carmel, also known as the Brown Scapular, is a modified version of Mary’s own garment. It symbolizes her special protection and calls the wearers to consecrate themselves to her in a special way.

Why do we wear the scapular ?

The scapular is Our Lady’s gift bestowed to us. We wear it to show our utmost devotion to the Virgin Mary, believing that it is a badge of salvation, a shield in time of danger and a pledge of peace and protection.

But, even though we wear this sacramental, there are three conditions which need to be fulfilled to obtain the benefits of this privilege. Such as:

Following these conditions can assure you Our Lady’s protection and deliverance in times of trouble and uncertainty.

Place your faith in Mother Mary as she is your greatest intercessor, continuing to believe in the Lord’s goodness and mercy, will grant you the key to everlasting life.